The Crankworx festival, just outside Innsbruck, was the latest venue for the Moore Large/O’Neal race team, and they were hoping for a change of fortune this weekend. The last two UCI World Cups were ones to forget. Crashes, injuries and mechanical woes were the story at Fort William and Leogang. The team were hopeful that the bad luck was behind them.

Innsbruck lies in the shadow of the Nordkette mountain range and is often described as the jewel of the Alps and rightfully so. Everywhere you look is just jaw-droppingly  beautiful with views that one could never tire of. 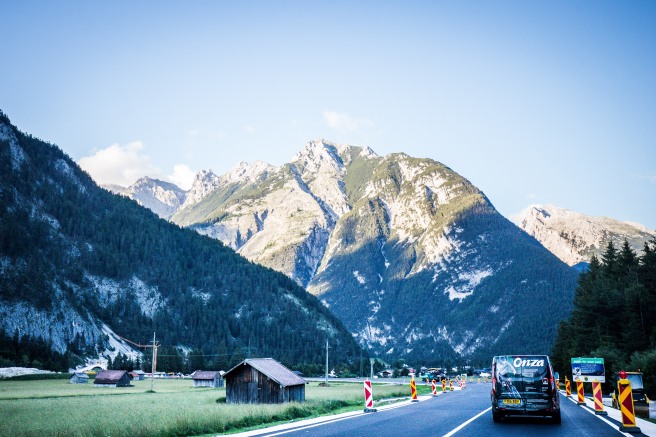 I’ve a feeling we’re not in Britain anymore

Crankworx is a four-round series that starts off in New Zealand and then hops to Europe with this weekend in Innsbruck followed by a round in France. The circus then heads to Canada for the finale at Whistler bike park.

The event is split between the downhill race at Götzens and the slopestyle, speed and style and whip off competitions at nearby Mutters.

Götzens was the venue for the thrilling downhill race 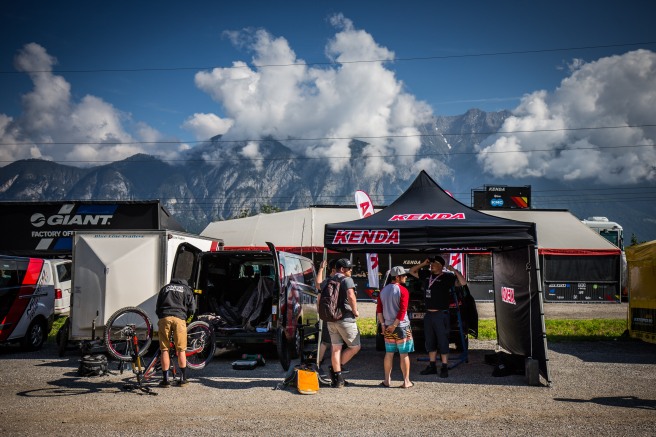 The sun shone bright for Friday morning practice and it was the first chance for Douglas and Roger Vieira to get the Polygon downhill bikes out onto the track. 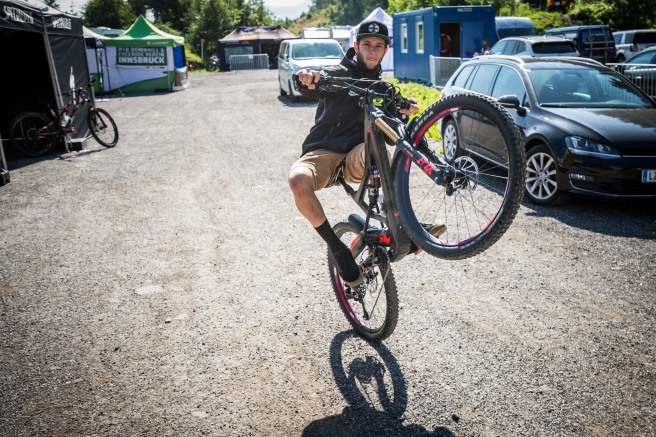 Douglas warmed up by casually wheeling through the tech area.

Last minute bike maintenance and warm up finished, it was time to head up in the gondola to the start line, high above the pits with even more breathtaking views.

Another country, another gondola.

The track would prove to be a riders favourite over the next 3 days. Around 3 minutes long and just a complete tech fest from start to finish. Roots and loam were the main features as the riders pinged and roosted their way down, threading the needle between every tree,  which would later prove to be the downfall of several riders. 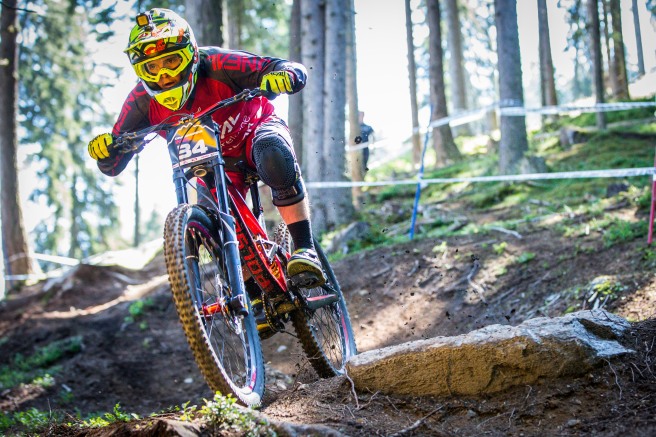 Fast and loose straight out of the start gate. 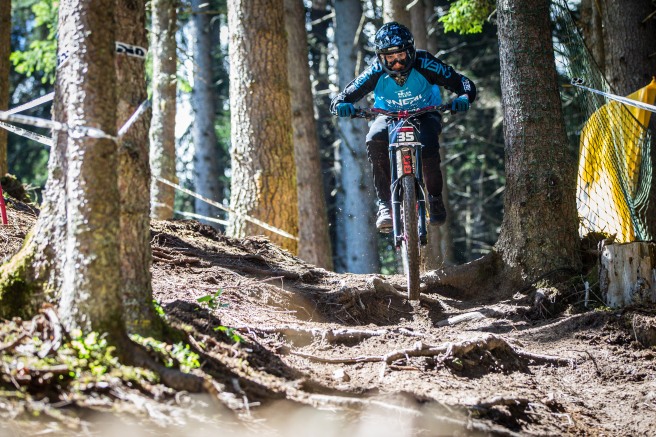 You want roots? You got ’em.

Roger speed tucking the boardwalk section halfway down the track.

The light was just right on this spot as Douglas kicked up the loam behind.

The sound of Alpine cow bells could be heard all weekend. 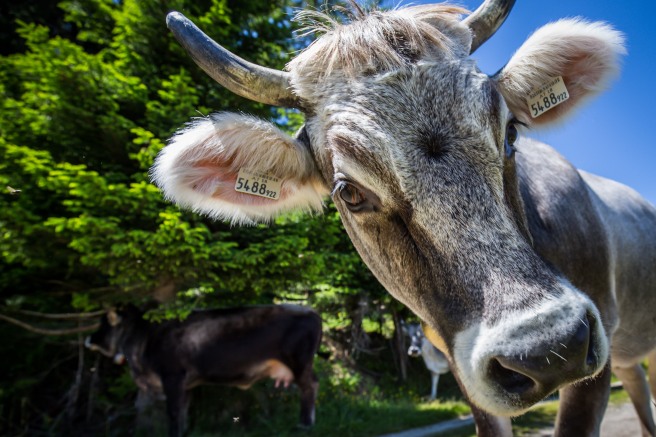 Made some new friends during the festival….

The light was just glorious at times. 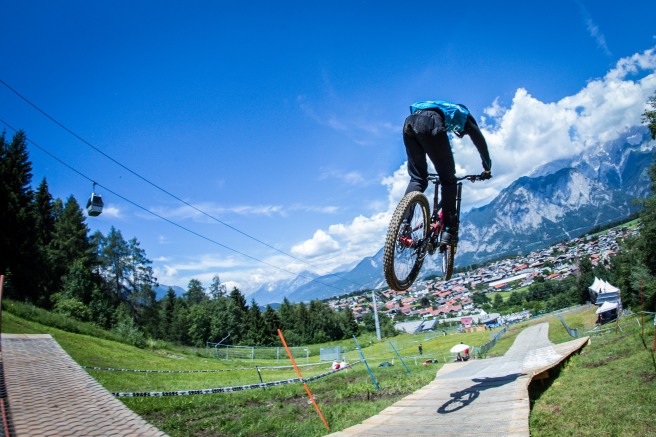 Douglas flying down to the finish.

Ducksmart products being used to wash away the loose dust after practice.

First practice runs finished, it was time to wash the bikes, pack away and head over to Mutters where Roger was scheduled to ride in the whip off competition.

The whip off  was another gondola ride to the top of the mountain and, well, this was just something else.

I don’t think there will ever be another venue I will ever shoot at again as epic as this. It literally took my breath away and no words can describe the scene in front of me.

Imagine jumping over your house at the top of the world. 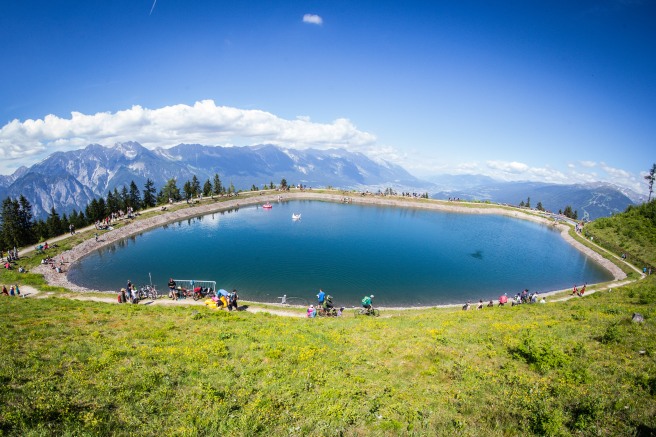 As words won’t suffice I’ll let the photos do the talking. All I will say is Roger made the finals with some incredible riding and it was something I will never forget. 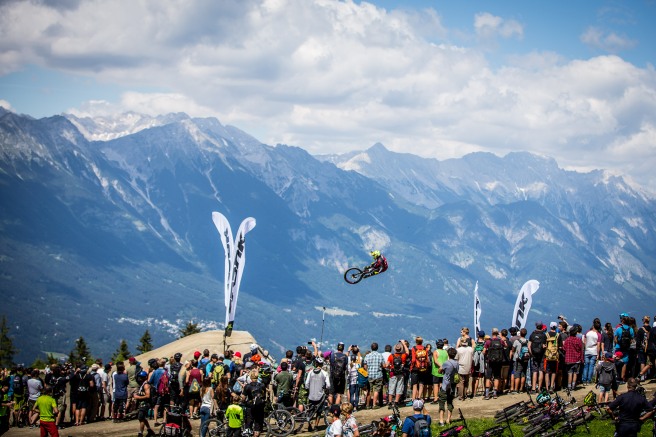 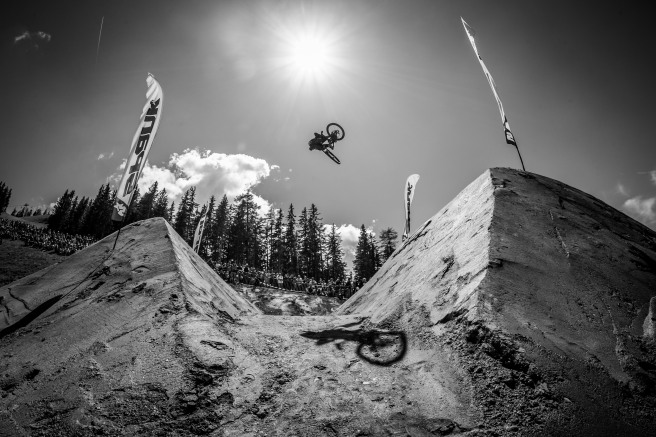 The whip off was over all too quickly and it was then back to the chalet to prepare bikes and riders for the upcoming downhill race. Saturday saw more practice for the young Brazilians and they arrived at Götzens Sunday morning ready for the day ahead. After 3 days of spectacular weather, the talk in the pits was of rain to fall mid afternoon, just as Douglas and Roger were having their runs. Thankfully, this was to be proved wrong and the sun shone all day long. 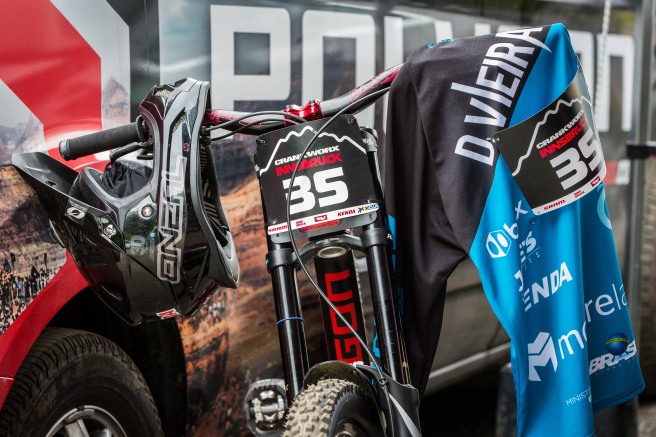 Bike and kit prepped and ready for Douglas. 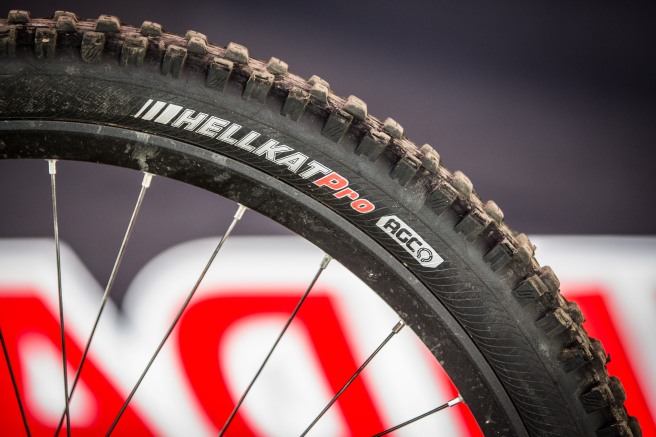 Kenda Hellkat’s were the tire of choice for the brothers. 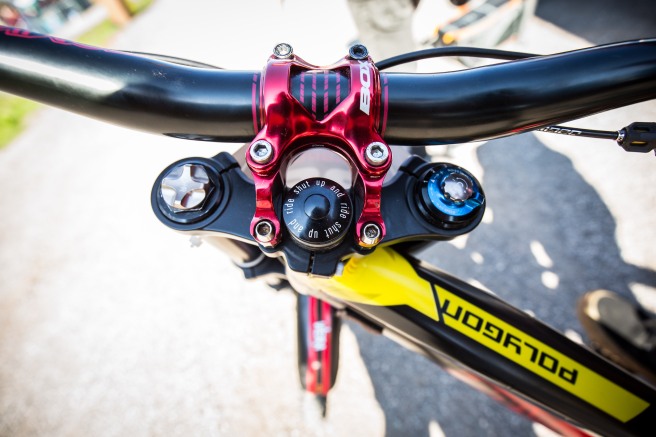 Do as the stem cap says.

Douglas was first on the track and a slight brake problem on the first section, chain issues and still nursing a injured ankle saw the younger brother finish in 27th place overall. Finishing less than ten seconds behind a stacked field of world cup riders, this was a great achievement.  Once back to full strength and free from any niggling injuries, Douglas will only reach higher up that leader board in the future.

Off camber roots were plentiful.

Sunshine streaming through the trees.

Did i say it was steep in places?

Loved this section with the gorgeous light.

Too fast for my camera panning skills.

Roger was the next rider down and eager to set a fast time.

New helmet for Roger after his horrific crash in Scotland.

Pinned on his race run. 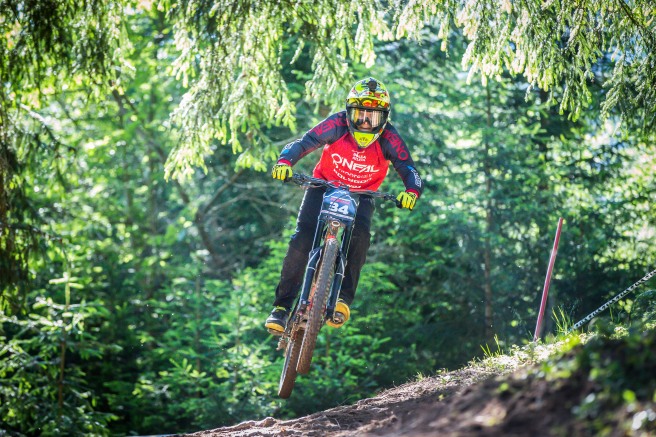 This huck was not for the faint-hearted.

Roger was full of confidence going into his run and, although he held a little bit back to have a safe run, he absolutely flew down this tough track to take the hot seat as overall leader. A superb sight to see for all the team. 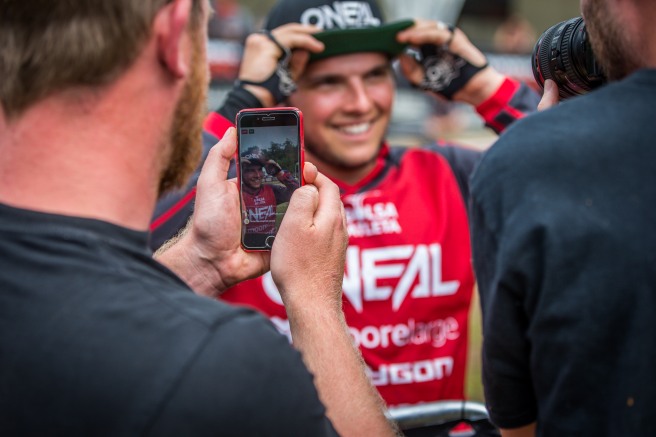 A very emotional moment for the team.

Roger remained in the hot seat for a considerable amount of time but as the later riders completed their runs he slowly moved down the leaderboard. As the dust settled and the final rider went past the timing beam, Roger’s position was an incredible 15th, just a fraction over five seconds behind Danny Hart and Samuel Blenkinsop.

Having both riders inside the top 30 at a world class event was a great achievement for the team. This can only surely boost both riders confidence that will lead them through to hopefully greater results as the world cup seasons rolls on in 2018.

Fitting to have a final shot with both brothers together.

View all posts by BigMac

One thought on “A VIEW TO A THRILL”